Seek First The Kingdom of God 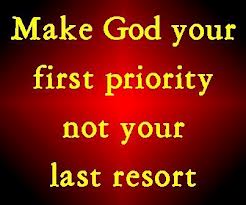 He was trying to give us a simple key
to help us keep our priorities straight.

Because most of us have no experience when it comes to kingdoms, this can be a bit of a foreign concept. Any kingdom is the area that someone rules
over or has controlling influence over.

In a sense, your house is a kingdom because you are the one that has the most control over what goes on there. The kingdom of God is an area that is ruled
by His love and overflowing grace.

When we decide to seek first the kingdom of God, we are entering into a whole new dimension that is so much higher than this earthly existence.

The first step in this process is finished when we are born again by our confession of faith in the King, Jesus Christ.

That’s the easy part. The tough part is daily committing our lives to putting God and His will first before everything else. We have to face and overcome the opposite values of this world every day.

That is a huge task because we can’t be God’s representatives and hide ourselves away from what’s going on around us.

Seek First The Kingdom of God

If you have tasted of the Lord’s goodness, then you should already have a desire to seek first the kingdom of God. In His kingdom there are no limits and being in His kingdom is the most exciting place you can be.

When we became God’s children, we became a part of His family and we are called to be about His business. We have become God’s ambassadors and our job is to release the influence of His kingdom wherever we go.

The problem is we can’t give away what we don’t have. But don’t buy the lie that the things of God’s kingdom are not reachable. They are not out of our reach.

Jesus backed this truth up in Luke 17 when He said that the kingdom of God is within you.

If it is so reachable, them why isn’t everyone walking in the glory of His kingdom? There is a simple answer to that.

Before we do, let us say this. Some people think God is stingy. That’s why He gave us His Son and that’s why Jesus’ miracles reeked of overflowing
abundance. God is not stingy.

Jesus also told us in Luke 12 that it is the Father’s good pleasure to give us His kingdom. Believe this.

Here is the simple answer. The things of God’s kingdom are ours as we learn to lay hold of them BY FAITH. BY FAITH.

As you begin to seek first His kingdom by faith, watch your lives explode with magnificent blessing. The kingdom of God is yours.

P.S. We all need constant reminders and encouragement to SEEK FIRST THE KINGDOM OF GOD. Courageous Men’s Destiny Teams are forming now to help you do just that at the link above.