Do You Still Celebrate Halloween?

It’s the time of year to celebrate halloween. I USED to think of halloween as good family fun. My church would even have a haunted house as a fund raiser during this time. 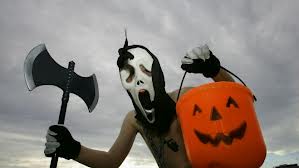 To celebrate halloween, I would dress up in some ugly garb to scare all the visitors who came by. I looked something like a type of spider woman. It was nothing like the Spiderman we all know and love today.

After I became a born again Christian, the Holy Spirit began to guide me into a very different direction regarding this seemingly harmless celebration.

Why do we celebrate halloween? Where did this whole idea come from?

Around 2,000 years ago, the Celts had a festival commemorating the end of their year on October 31st. They believed on this night that a door between the living and the dead was open. They believed this door allowed spirits of the dead to mingle with them, to possess people, and to cause all kinds of trouble.

The Celts offered food and drink to aid the spirits, or sometimes ward them away. They dressed up in outlandish costumes and roamed the neighborhoods.

Other strange customs involved moving gates and fences, women dressing as men, men dressing as women, as well as other trickeries now associated with halloween.

The Celtics honored the dead during this time. A central bonfire was always lit to honor the pagan gods. Fairies were believed to roam the land as beggars asking for food. Those who did not give were punished by them. This lines up with our modern practice of “trick or treat”.

Today, as a way to celebrate halloween, many of these same practices continue at neighborhood halloween parties.

As you can see, halloween’s history is all pagan.  This celebration of darkness has only gained more and more evil practices. Today, witches still gather to celebrate and sacrifice offerings to pagan gods on that night.

Another self-described former “eclectic witch,” said in a recent interview, that when he first came to faith in Christ, the reason he hated halloween so much was because of his sensitivity to the occult symbolism associated with it.

He said, “As the costumes got more and more grotesque and more celebratory of darkness, it bothered me a lot. I knew what was on the other side and I knew it was real.”

As my conviction grew about this issue, I knew I could no longer celebrate halloween. I knew that I could “Have nothing to do with the fruitless deeds of darkness, but rather expose them.” (Ephesians 5:11).

I then began to wonder should Christians celebrate halloween. There isn’t anything about this that honors the Lord. Is this just a playful or harmless fun activity?

I strongly urge you to take a good look at this.

Once my eyes were opened, there was no turning back for me. The Lord continually confirmed His desire for me to have nothing to do with this, over and over again. Despite much opposition from others and acting as if I was the loco one, I knew it wasn’t going to be a part of my life.

Lord, guide us into all truth by your Holy Spirit.  May we have nothing to do with the fruitless deeds of darkness, but may we expose them.

P.S. Why do you still CELEBRATE HALLOWEEN? I invite you to take a look at some fun and powerful ways to celebrate the Biblical feasts by clicking the link above.