Prayer For The Healing of America

America is our home and the Body of Christ must 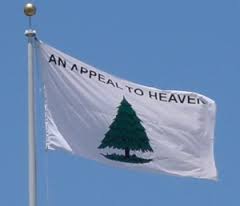 come together in prayer for the healing of America. We are in a time that is just as important as when America gained its independence and became one nation under God. Here is a simple but powerful way to get engaged.

Make YOUR appeal to heaven and show your neighbors by getting your own 3X5 An Appeal To Heaven flag. Take Your Stand Now. We suggest a donation of $35 for the Premium outdoor nylon flag to cover the total cost, including shipping. You can make a secure donation after a quick sign up below.

George Washington knew there was no way he could defeat the British without God’s divine help, and he used the Appeal to Heaven flag to get God’s attention. We are in very similar times —-  a time for a spiritual revolution!

Dutch Sheets, a modern day Washington and true prayer warrior for our nation, was given an awesome vision about this flag’s importance. These are serious times, and we cannot afford to stay on the sidelines. We must join the fight for our nation’s promised heritage and prayer for the healing of America.

Much has changed in America over the past 50 years and much of it has been destructive.  Would you be willing to take some simple action to help put a stop to this lunacy? If you are, look over the following 3 steps and JOIN US NOW in making an appeal to heaven.

America was founded on Biblical principles by men and families looking for the freedom to worship God and pursue their God-given destinies. Their amazing and miraculous journey started in the 1600’s and came to a wild climax with the American Revolution.

These men and women made big sacrifices to realize the dream of living in freedom. They were were willing to stand up against the most powerful country in the world, Great Britain, so they could experience the God-given benefits of freedom. Our history books have erased all of these facts.

Have things changed so much that we will allow these freedoms to be removed so easily?  If concerned Americans keep their heads in the sand much longer, there may not be much left to restore.

There are 3 steps that we can take to see:

1) The Christian heritage of our nation restored,

2) Our freedoms returned to us without the expanding government control,

3) The sanctity of life restored in this country, and

4) The freedom to acknowledge and honor God again in our schools, our courts, and in the business world.

Is it too late to do something meaningful? No, but the following 3 steps will begin to turn things around again.

The Answer: Step #1 – An Appeal To Heaven Flag

Our first step effectively deals with 2 of the big reasons that the United States is suffering so much. The Church is riddled with division and has lost much of its power to be the light that it is supposed to be. It is past time for the Church to stand together  in prayer for the healing of America.

Secondly, many are ignoring the truth that Almighty God is the ultimate source of all good things. He is the source of our success, our happiness, and our protection. He is the answer to every problem. Faith-filled prayers are the key to see Him move and heal our land.

There is a simple step you can take that will:

1) Create a more unified and bold Church of Christ, and

2) Ignite a movement of unified prayer across America.

Again, get your own Liberty Tree Flag from our non-profit 501cs ministry and fly it outside your home. Join us in unfied prayer for the healing of America. Discover the DEEP spiritual meaning of this flag as Dutch Sheets talks about An Appeal To Heaven. Then, share this with your neighbors and friends and church.

You definitely will not be able to find this flag in any of our current history books, but it was  a common site on the battlefields during the American Revolution. George Washington had this flag flown on the first naval schooners fighting against the British navy.

The Appeal To Heaven Flag was a bold reminder of the colonists’ need to pray as they faced insurmountable odds during the American Revolution. It also served as a symbol of unity as the colonists met under an evergreen tree in Boston to discuss their response to Britain’s growing oppression. Additionally, the tree represented the struggle of dealing with England confiscating harvested pine trees for their ships.

Right now, there is a growing prayer movement across America related to this flag that was started by a man of God named Dutch Sheets. He strongly believes that God is not finished with this nation. He believes that America is poised to see its finest day.

We fly this powerful flag outside our home for all to see. It reminds us to make our appeal to heaven to see our nation honor God once again and to heal our land. As we live under this anointed banner, we expect the Lord’s glory and presence in a mighty way like the Israelites did in Goshen.

This 3rd step is to get Godly people in office and that is accomplished by voting for Godly people.

Did you believe this is a Christian nation? Then how can a Christian nation be governed by ungodly people who have little regard for God’s Word? Many Christians have mistakenly thrown away the responsibility to vote and pray for our leaders.

The Next American Revolution?

If a group of people will act on these 3 steps above, great things for America will return here quickly. Are you ready to take a stand?