God is Our Avenger! We must always remember to give Him space to do just that-exact satisfaction for (a wrong) by punishing the wrongdoer! Following God’s ways are always the high way to this life.

I love the example found in 1 Samuel 24 when David spares Saul’s life: 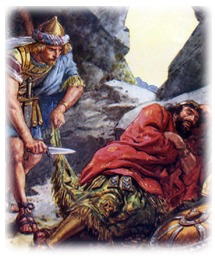 “When Saul returned from following the Philistines, he was told, “Behold, David is in the Wilderness of Engedi.”  Then Saul took three thousand chosen men out of all Israel and went to search for David and his men in front of the Rocks of the Wild Goats.

On the way he came to the sheepfolds where there was a cave; and Saul went in to relieve himself. Now David and his men were sitting in the cave’s innermost recesses. David’s men said to him, “Behold, this is the day of which the Lord said to you, ‘Behold, I will hand over your enemy to you, and you shall do to him as seems good to you.’” Then David arose [in the darkness] and stealthily cut off the hem (edge) of Saul’s robe.

Afterward, David’s conscience bothered him because he had cut off the hem of Saul’s robe. He said to his men, “The Lord forbid that I should do this thing to my master, the Lord’s anointed, to put out my hand against him, since he is the anointed of the Lord.” So David strongly rebuked his men with these words and did not let them rise up against Saul. Saul got up, left the cave and went on his way.

Then David also got up afterward and went out of the cave and called after Saul, saying, “My lord the king!” And when Saul looked behind him, David bowed with his face to the ground and lay himself face down. David said to Saul, “Why do you listen to the words of men who say, ‘David seeks to harm you?’

Behold, your eyes have seen today how the Lord had given you into my hand in the cave. Some told me to kill you, but I spared you; I said, ‘I will not reach out my hand against my lord, for he is the Lord’s anointed.’ Look, my father! Indeed, see the hem of your robe in my hand! Since I cut off the hem of your robe and did not kill you, know and understand [without question] that there is no evil or treason in my hands. I have not sinned against you, though you are lying in wait to take my life. May the Lord judge between me and you; and may the Lord avenge me on you; but my hand shall not be against you.”

Have you ever been in a position where you can easily speak solid truth about a person that would put an end to them and their relentless attacks against you or your character? Have you been in a place where you knew something from personal experience about a leader, co-worker or even a so-called friend or close family member that would take them down? Have you had someone lie about you, and say all manner of evil against you; and though many try to get you to speak evil of them, you refuse even knowing this truth be told could greatly benefit you?

I have been in situations many times where I felt just like David must have felt. I have felt like I was dodging arrows or swords by people’s actions or words against me, even when I had tried repeatedly to submit to, to forgive,  to encourage or to befriend them. All the while having others relentlessly try to get me to say words of gossip or negativity against this perpetrator who was continually treating me like Saul treated David. Every time,  I usually would hear the Lord say, “Choose my way, I Am Your Avenger!” In every intensely difficult situation, I can honestly say, He has been my Avenger!

I love to tell my children about a lady whom I thought was one of my best friends. She really started showing her true colors when I announced my engagement to be married.  After the announcement, she proceeded to engage in an all out attack against me, and vamped toward my future spouse.

I was a newly born-again Christian at the time, and I was, but even remain, pretty naive regarding people. I always think highly of everyone and this has bit me in the butt on more than one occasion.  Anyway to make a long story short, one day she was in Louisiana, and a few days later she was in Norway. He will be your ever present help! Wow, God moved quickly in that situation!

God’s higher ways are always the only way to go. His standards were created to help us live life to the fullest, Luke 18:7  “And will not [our just] God defend and avenge His elect [His chosen ones] who cry out to Him day and night? Will He delay [in providing justice] on their behalf?”

There may be special situations where this does not apply. Sometimes wisdom needs to be shared and specifics as the Lord leads, and each of us need to seek the Lord’s wise counsel every day to know what He desires. But in the majority of situations with leaders, friends, coworkers, patriarchal situations, and most social contacts I believe this should be the standard.

When the enemy uses others to try to get you to place a sword in your persecutors belly, stop and pray. Seek Him first, and follow His wisdom.  If you do that I can promise you with patience and faith, all things will be restored and added to you!