What is Hanukkah? This is a Jewish holiday with a very important message for Christian believers. Hanukkah, known as the Festival of Lights, or the Feast of Dedication has an amazing link to Christianity as do most of the feasts spoken of in the Bible.

Look into this wonderful story, and discover for yourself its relevance to every Christian believer. See if you can recognize the connection between the supernatural grace released to push back the darkness embodied in this holiday and God’s dedication to us through giving His only begotten Son to bring His light back into the world!

To completely answer what is Hanukkah, I’ll provide some enlightening Hanukkah facts: Before 165 BC, the Jewish people who lived in Judea were under the rule of the Greek kings. King Antiochus Epiphanes took control of the Temple in Jerusalem, and forced them to give up all worship of God. He made them bow down to the Greek false gods.

Records clearly show that he defiled the temple by sacrificing a pig on the altar, and spilling its blood on the holy Scripture scrolls. As a result of this persecution, a group of ONLY four Jewish brothers, led by Judah Maccabee,

assembled an army of warriors to fight against this evil control and blasphemy. After fighting for three tough years against all odds, a miraculous victory was achieved, and the Temple was rededicated to the Lord.

As part of this rededication, a flame representing God’s divine presence was to be lit for 8 days. However, most of the oil for this flame was defiled by the Greeks, and it would take a week for enough new oil to be purified. Though there was only enough oil for one day, the eternal flame burned miraculously for the eight days required during this ceremony, until more sacred oil was ready.

Hanukkah also means dedication, and has been commemorated for centuries by lighting a special nine-branched candelabra, called the menorah. One candle referred to as the “servant”, is used to light the others.

Jesus Christ is our perfect example of servant-hood as described in the following scripture. Phil 2:8-9 states: “And being found in appearance as a man, He humbled himself by living a life of utter obedience, to the point of death, and the death he died was that of a common criminal. That is why God has lifted him to the heights, and has given him the name above all names.”

Hanukkah is a picture of God’s precious Son, the Light of the World, and through the gift of His Spirit in us, we can be a Light as well!

As Paul says in Colossians 2:16-17, these feasts are a shadow of things to come! As Believers, we will learn more about Him as we celebrate the festivals that were important to Him!

I trust that you now have an answer to what is Hanukkah to encourage you to experience this holiday. We invite you and your family to learn more about His Biblical feasts  and watch the doors of God’s blessings open up for you to enjoy.

A family guide to Biblical holidays is a great way to improve your relationship with the Lord. While each person’s relationship with Christ is a deeply personal experience, it can never thrive in isolation from other believers. Family life and church connections are essential to growing in love, forgiveness, and faith.
As your family experiences the awesome blessings that come by celebrating the Biblical holidays, you can then share this with your church body.
Question: What are the Biblical holidays?
Answer: The best place to find the the answer is in Leviticus 23. You will see that this includes the 3 annual feasts and the Sabbath celebrations. The 3 feasts are Passover, Pentecost, and the feast of Tabernacles. In addition, the firstfruits celebrations are a monthly observance to remember the Lord’s goodness at the start of every month. This is mentioned in Numbers 10:10. You will also find out about the year of jubilee and the 7th year sabbath in Lev. 25.
Question: How can a family guide to Biblical holidays enrich my family’s spiritual growth?
Answer: God gave these feasts to Israel so that they could be positioned to receive the fullness of His blessings. As Christians, we have the same Father as Israel had. When our families observe these holidays, we are aligning ourselves with God’s will and separating ourselves from ungodly celebrations.
Question: What makes these Biblical feast days so special?
Answer: Each of these holidays contain powerful lessons for us that increase our understanding and passion for God and His Son. Consequently, our families are better able to think, talk, and act with an attitude of Godly love as Jesus did.
If you are looking for an exciting and powerful way to bless your home, a family guide to Biblical holidays is the key. We invite you and your family to learn more about His Biblical feasts  and watch the doors of God’s blessings open up for you to enjoy.

This Jewish cookbook open the powerful doors of God’s blessings to your family. We are a 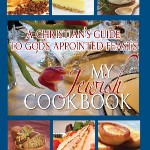 Christian family and have been celebrating the Biblical feasts for years now.

We have seen such an awesome display of God’s goodness in our lives and we want to share that with you.

Our Jewish cook book is actually a family guide to Biblical holidays. It is full of Jewish cookbook recipes for you to enjoy and share with your family.

We have put together a short video to introduce this unique and colorful digital Jewish cookbook below.

GET MY FREE MINI-COURSE